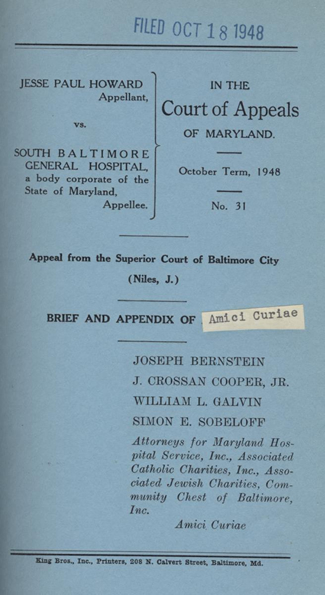 During this period, Sobeloff's private practice was growing rapidly. His clients included banks, race tracks, Rosa Ponselle, and the Baltimore Colts, but he remained deeply involved with both city and state government. He took an active part in his friend McKeldin's successful race for governor in 1950, after which he functioned as "first minister" in the McKeldin "kitchen cabinet." In March 1951, McKeldin appointed Sobeloff to head a commission to make an extensive study of the operations of state government. The "Little Hoover Commission," or "Sobeloff Commission," as it came to be known, did an exhaustive study of every aspect of state government, from taxation to budgeting to the structure of the executive Branch.

In addition, he continued as counsel for the Baltimore Housing Authority, causing one reporter to comment that Sobeloff had two direct lines on his desk, one to McKeldin and one to Mayor D'Alesandro. When the City Council Housing Committee held hearings on a bill to lay the groundwork for the transfer of three federal housing projects to the Housing Authority, the Real Estate Board opposed the measure on the ground that it would extend subsidized public housing. Representing the Housing Authority, Sobeloff charged that the Real Estate Board favored subsidies for the rich but not the poor. He could not understand how the Board could have just urged Washington to contribute to insurance mortgages of well-heeled builders but "when we try to take a family out of a rathole, they cry socialism."

In April 1952, Sobeloff and McKeldin left on a trip to Israel, with a planned stop in Paris to see General Dwight D. Eisenhower. The meeting had been arranged by Thomas E. Dewey, the leader of the Eastern, or liberal, Republicans, who was busy promoting Eisenhower's candidacy for President. Shortly before they left, Robert A. Taft, the Republican leader in the Senate and conservative favorite for President, called McKeldin and warned him not to be swept off his feet. McKeldin, Sobeloff, and their wives lunched with the Eisenhowers, after which reporters asked McKeldin whom he would support. McKeldin replied that he had commitments from the Maryland delegation to support McKeldin's favorite son candidacy on the first ballot, but added that he always followed the lead of Tom Dewey. Several months later, Sobeloff wrote the speech with which McKeldin nominated Eisenhower at the Republican convention.

[Read about Sobeloff's appointment to the Commission. Courtesy of Enoch Pratt Free Library.]

[Read Sobeloff's introduction to "The Maryland Budget System: First Interim Report. Commission on Administrative Organization of the State of Maryland," 1951.]