Sobeloff's private practice was interrupted in 1935 when Judge Eugene O'Dunne chose him to investigate the failure of the Baltimore Trust Company the largest banking institution south of Philadelphia. Baltimore Trust first ran into trouble in September 1931, and members of the business community raised a fund of $7 to 8 million in hope of averting a failure. In spite of their efforts, the bank never reopened after the bank holiday of 1933. Rumors circulated about the conduct of the officers and directors. The State Banking Commission appointed a receiver and three lawyers to act as counsel for the receiver. In September 1935, the receiver moved to collect statutory double liability from the bank's stockholders. Sobeloff was one of the lawyers representing the stockholders and suggested that before this liability should be exacted, there should be a showing of the nature and amount of the losses and a finding that this assessment was necessary to pay the bank's debts. At a hearing before Judge O'Dunne, it came out that the losses totaled $26 million. O'Dunne declared himself "shocked" at the nature of the loans which resulted in the losses. At this point he ordered an official inquiry to determine whether criminal or civil liability should be enforced against the officers and directors and named Sobeloff to undertake the investigation. 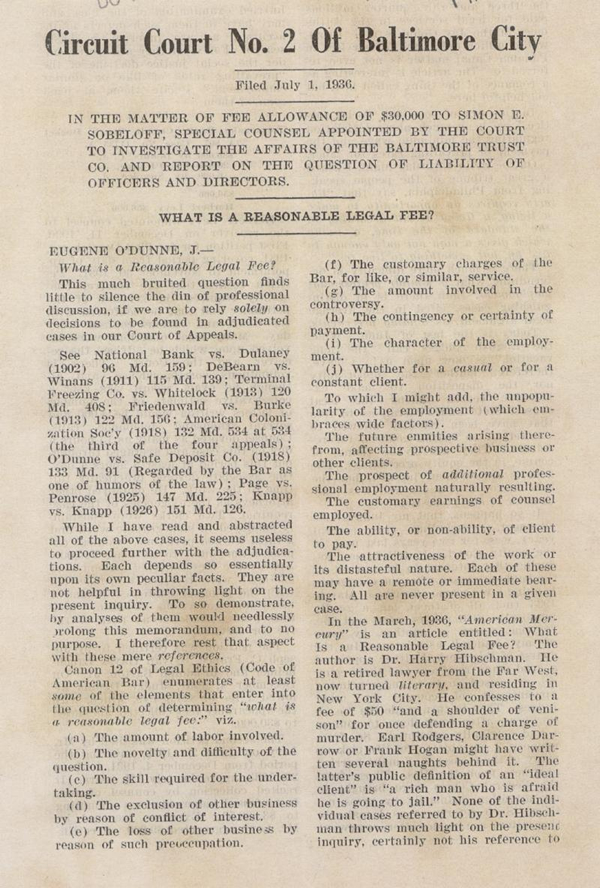 On December 13, 1935, Sobeloff declared that it had been impossible to complete the investigation in the time allotted, but he turned in a five-hundred page "partial report." O'Dunne commended him for "the arduous work he had done, the heroic efforts of time and talent expended, which is simply staggering in character, and the Court marvels that any human being, in the time allotted to him for this work, could have produced such an intelligent and comprehensive result." The judge also requested him to continue working until he could complete the investigation. Sobeloff filed the final report on June 6, 1936. While the six-hundred-and-fifty page report did not recommend criminal prosecutions, it did allege that the directors were "personally liable for their negligent acts" and also liable for the "grossly" negligent conduct of the officers in that they failed to exercise proper supervision.

Judge O'Dunne called for the "relentless" prosecution of suits against every director and officer of the Baltimore Trust Company. Prosecuting the leading business and financial men of Baltimore was a thankless job and one of the attorneys for the receiver withdrew because of his personal relations with the defendants, O'Dunne appointed Sobeloff to take his place. The ensuing actions recovered a quarter of a million dollars. Finally, O'Dunne ordered the stockholders' liability be set at five dollars a share. Sobeloff declined to represent the receivership in these negotiations because of a potential conflict of interest.

After the smoke had cleared, O'Dunne cited Sobeloff's "stupendous work" and his investment of almost a year's intensive effort. Even higher praise came from the usually cynical H. L. Mencken, who wrote that, "The Hon. Simon E. Sobeloff's excellent report . . . shows all the compelling plausibility of a demonstration in geometry and all the racy charm of 'The Gilded Age.' "