The University of Maryland Baltimore Foundation funded this digital collection of the University of Maryland School of Law archives. The collection consists of approximately 7,000 digitized images, including course catalogs, yearbooks, commencement programs, grade books, and faculty minutes. Each document is presented in PDF and is fully searchable within each file. A complete list of all available documents is provided. Additionally all material may be searched in the library's Catalog.

The following is adapted from Eugene F. Cordell's "official" history of the University.  Eugene F. Cordell, University of Maryland, 1807 - 1907: Its History, Influence, Equipment and Characteristics,  (New York: The Lewis Publishing Company, 1907) and from W. Calvin Chesnut, A Federal Judge Sums Up. (S.N.: S.l., 1946).

The education of lawyers in the early nineteenth century was by apprenticeship rather than by the now familiar course of academic study that it is followed today. Baltimore's David Hoffman is generally regarded as the founder of the first University-based legal instruction program in Maryland. Hoffman was a prodigious writer and legal commentator who was, throughout much of his career, an important influence and an active supporter of the University of Maryland. A more complete history of Hoffman, the founding of his Law Institute and his other activities can be found online.

According to Eugene Cordell's history, the University of Maryland the School of Law was revived in 1869 upon the initiative of Professor Christopher Johnston of the Faculty of Physic {personal statement of Professor Poe to Cordell}. At that time, two members of the Faculty of Law remained from the earlier incarnation of the program, George W. Dobbin and John H. B. Latrobe. These two faculty members filled the vacancies in other programs by supporting the election of many of their colleagues in the Maryland legal community: George William Brown, Bernard Carter, H. Clay Dallam, John P. Poe, Hon. Robert N. Martin and Hon. John A. Inglis. The latter two had filled with distinction high judicial positions and were elected Professors, while Judge Dobbin was made Dean.

On the first Monday of February 1870, a class of twenty students undertook the introductory course of instruction, which continued until the start of the following summer. Lectures were delivered at the building of the Department of Arts and Sciences on Mulberry, opposite Cathedral street, and were attended mostly by young members of the bar, "attracted, perhaps, to some extent at least, by the novelty here of the attempt to teach law." A leading member of the bar and graduate of the class of 1871 wrote of the first Faculty: "Professor Inglis, while not an interesting lecturer, was a most admirable and painstaking, learned and thorough teacher. Professor Martin was also a very strong man, possessing great mental vigor and extensive legal acquirements; his relations with the students were very pleasant. The course for those days was a very good one." In July 1870, Judge Martin died, and was succeeded by Hon. Alexander H. Handy, a native Marylander who had served as a judge in Mississippi.

The second session began in October 1870 with Mr. John P. Poe being added to the Instructors in the chair of Pleading and Practice at Law. Professor Poe lectured at night, and his class numbered from three to seven.

The first commencement was held in the court room of the United States District Court, Fayette and North Streets, because there were only a few graduates: John J. Donaldson, J. H. B. Latrobe, Jr.; Harry E. Mann, Charles K. Poe and Samuel E. Turner, Jr. Mr. S. Teackle Wallis conferred the diplomas. Mr. Reverdy Johnson delivered the address and received at the hands of the Regents the honorary degree of LL.D. The newspapers note as unusual for such an occasion that there were few ladies and no bouquets present. Many distinguished members of the legal profession attended as well as Professors Christopher Johnston and William E. A. Aikin of the Faculty of Physic, and Rev. J. G. Hammer of the Faculty of Theology.

In the fall of 1871, Judge Handy returned to Mississippi, and a rearrangement of the chairs was again necessary. The following assignments were made: Hon. George William Brown, "Constitutional Law;" Arthur George Brown, "Admiralty and Shipping;" Benjamin C. Barroll, "Principles and Rules of Equity, Jurisprudence, Pleading and Practice."

In the fall of 1872, Professors Brown and Barroll retired, and Professor Richard M. Venable was hired to assist Inglis and Poe. These three constituted the Faculty for the next six years. The course work was distributed as follows: Hon. John A. Inglis, LL. D., Professor of Commercial Law, Equity and Jurisprudence, etc.; John P. Poe, Esq., Professor of Pleading, Practice, Evidence and International Law; Richard N. Venable, Esq., Professor of Law of Real Estate, Leaseholds and Crimes and of Constitutional Law. At the commencement held in the Academy of Music on May 26, 1876, there were 29 graduates.

In September 1878, Judge Inglis died, and his courses were divided between Charles Marshall and Bernard Carter. Marshall occupied for four years the chair of Commercial Law and Law of Contracts while Carter held for five years the chair of the Law of Domestic Relations, Corporations, Personal Property, Executors and Administrators and Equity Jurisprudence. 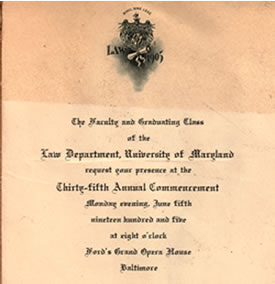 In the session of 1879-80 (the first for which Cordell could secure a catalogue), there were 60 students and 26 graduates. Students were divided into two classes: senior and junior. Students could enter immediately into the senior class and graduate in one year, but a rigorous examination was necessary with a required grade of 75. All graduates in general had to attain a grade of 75 and write a thesis. The school awarded two prizes of $100: one to the student attaining the highest grade in the four examinations and another to the student submitting the best thesis. There was a Literary Society among the students, known as the Inglis Society, and at the advice of the Faculty, students also formed quiz classes. A moot court met weekly under the presidency of one of the professors. The school charged $100 for the session of eight months with an additional diploma fee of $10.

The late 1890s and 1900s saw the arrival of some of the most important names in Maryland legal history joining the faculty including Albert Ritchie, Edgar Gans, Henry Stockbridge, W. Calvin Chesnut, and Herbert Tiffany. In 1912 the University of Maryland took over the Baltimore Law School adding many of these students and faculty to the law school's structure. The advent of the War in Europe led to a marked decrease in student enrollment and in the number of students completing the program. Despite this dwindling enrollment and the financial challenges this created the school decided to stay open throughout this period and on through the depression years. The school would not fully recover from the effects of this trend until after the second World War.

The University of Maryland School of Law is a nationally recognized leader in clinical legal education, providing its graduates with a sophisticated appreciation for the relationship between legal theory and practice. The School’s specialty programs in Environmental Law and Health Care Law are also ranked among the very best in the nation. Burgeoning programs in business, intellectual property, advocacy and dispute resolution provide additional areas of concentration for the law student. The required curriculum emphasizes legal analysis, research and writing.

The School of Law’s state-of-the-art building provides the technological infrastructure for continuing advances in legal education, scholarship and service. Computer access from every classroom seat and every seat in the Thurgood Marshall Law Library as well as sophisticated audiovisual technology facilitates distance learning, teleconferences and other new learning opportunities. Technological support for teaching and faculty scholarship and service will enhance the work of an extraordinarily productive faculty.